From January 16th to the 23rd, the Spanish company Zero 2 Infinity prepared and carried out a flight rehearsal of Bloon.

Bloon is a pod for Space tourism that flies up to 36 km to allow its travellers to observe the Earth. At this altitude, voyagers can already see the blackness of Space and the curvature of the Earth. The fact that Bloon flies thanks to a helium balloon makes for a safe, relaxed and enjoyable trip.

The engineers at Zero 2 Infinity spent some days in Lleida-Alguaire Airport carrying out flight preparations. The team was joined by Steven Peterzén from ISTAR who consulted and offered advice in the overall ballooning operation. 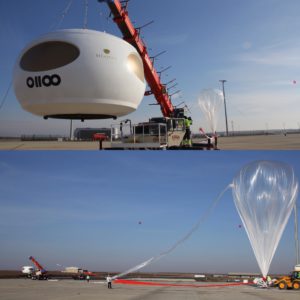 Despite the windy weather – an important flight constraint – the team was able to find a calm window to carry on with the mission and balloon inflation was given a go. The 35K m3 balloon was filled with helium through two pipelines. The flight train was 63 m long and included the trackers and the parachute. At the end of it, a real-size Bloon model stood.

The company has been working on the new real-scale model for some time now and is happy to see it made reality. You can see its dimensions in the picture below, with Jose Mariano Lopez-Urdiales, the CEO and founder of the company. 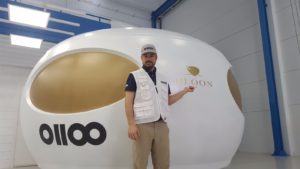 The flight rehearsal finished with the tethered balloon taking off. The Zero 2 Infinity team is happy with the rehearsal results. The flight also allowed for the testing of the new valve the engineering team implemented in the balloon as a new flight termination redundancy system.

Zero 2 Infinity wants to thank Lleida-Alguaire Airport for their collaboration and is interested in working again in the facility in the future.